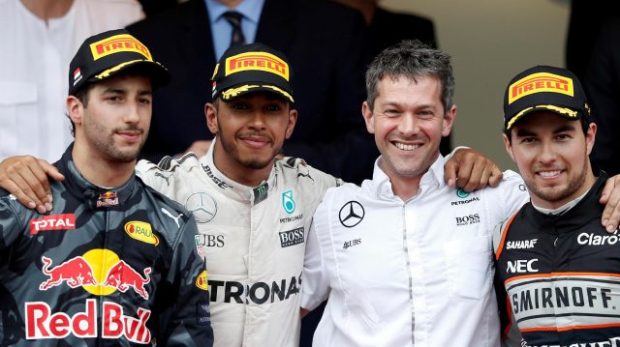 Smiles all round? ©Sky Sports F1

Sunday morning was met with showers in Monaco and the race started under the safety car, but the rain soon cleared and the track dried up to make way for some eventful racing.

Nico Rosberg had issues from the start with his brakes meaning he had to give his second place position to Lewis Hamilton.

As soon as the safety car pitted Jolyon Palmer crashed, it seemed the zebra crossing impacted on his rear tyres meaning he lost control and hit the barrier.

First to make a tyre change was Jenson Button and most of the pack followed him. After the safety car went in and the track began to dry in places Button decided to switch to inters. Race leader Daniel Ricciardo stayed out second longest on the full wets but went on to inters to stay safe, Hamilton opted to stay out on his wets for as long as possible so he only had to make one pit stop. He stayed out and managed to make the full wets work for him before he moved on to the ultra soft slick tyre. Ricciardo tried to make the undercut when he pitted for softs but unfortunately the pit crew were not ready and he was left waiting for 13 seconds, this ultimately gave Hamilton the win. Although Ricciardo battled hard and nearly overtook Hamilton in a couple of places around the track, Hamilton’s defending was just too good. 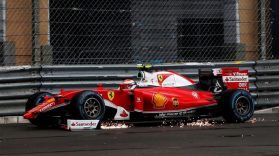 Kimi Raikkonen was called into questioning with the stewards after he crashed and
continued round the track with his front wing caught underneath the car, after the marshals had told him to pull over. He eventually did pull over but that was after holding up the other drivers and after leaving a substantial amount of debris on track.

Daniil Kvyat experienced several problems over the race, at one point he was a lap down and whilst trying to make up places he went to overtake Kevin Magnussen. The move was poorly executed and he didn’t check to see if there was enough room. He caused a collision between the two of them but luckily they could both continue. Magnussen later finished his own race by getting his timing wrong on a corner and hitting the barriers, he damaged his front wing and by that point Renault had run out of front wings for the car so they had to retire him.

Towards the end of the race Sauber decided to switch their drivers to give Marcus Ericsson a chance to work his way up the field. Felipe Nasr seemingly refused to comply with the team order, even when it came from the top. Ericsson decided to go for an overtake but lost out and both cars had to retire after they crashed. Ericsson was given a penalty for the move.

Fifty years for McLaren was celebrated in style with both boys bringing back points with two top 10 finishes, the first for the team so far this season. Jenson Button said he could have done better and said to Sky F1 that he pitted too early and should have carried on with the full wets for a bit longer.

Lewis Hamilton: Yeah. Firstly, big congratulations to this guys [Daniel Ricciardo]. He drove phenomenally all weekend. Just one of the best drivers I’ve raced against, really he did a fantastic job today. That was a lot of pressure I was under and it was incredibly close, particularly on those re-starts but he did a phenomenal job. So I’m looking forward to many more battles with him. I’m sure he’s not that happy, since he started pole and it’s never great to start pole and come second, but he should feel proud of the way he drove.

Daniel Ricciardo: Ha! I don’t even want to talk about the race to be honest. Just want to say thanks to the fans, thanks for sticking out this weather. I guess from the outside we put on a show. Shouldn’t have been as exciting as it was to be honest. Two weekends in a row I’ve been screwed now. It sucks. It hurts. But thanks to everyone for sticking it out, I appreciate it.

Sergio Perez: I’m extremely happy because my team has done a tremendous job – with the strategy, with the calls, with the pit stops. It’s been an amazing day for us certainly my favourite podium with the team, so a very special to have it in Monaco, especially in these race conditions. I want to dedicate this podium to our boss Vijay Mallya. He has been very supportive during these times and I really want to dedicate this one to him. 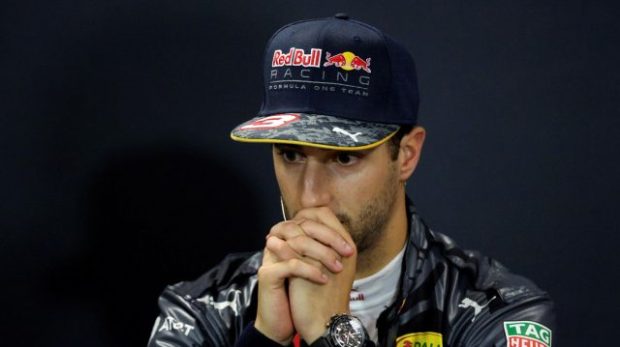